A crash course on x86 to make it less scary.

So, you want to learn x86? Well, you've come to the right place!

PS: Please excuse the poor drawings. I did my best only having a trackpad for drawing.

This is by no means an exhaustive guide for all there is to know for x86, but hopefully it will be a comprehensive overview of the most important parts of the language.

You might be wondering why I would subject myself to torture by trying to learn Assembly in the first place since it's "either too hard" or "it's boring as hell". Well, you're right, it's definitely not the most interesting thing in the world. Since I'm taking a course of offensive security, I kinda need to at least understand the basics of it -- mainly to understand program disassembling for CTF.

So far, there aren't too many simple guides on learning x86 online compared to other languages. So hopefully, this will be a quick and easy guide for you to follow to learn the very basics of x86. 😄

Worse than MIPS. Just kidding. x86 is a variant of Assembly that is commonly written for x86-64 processors which are CISC processors (common in most desktop computers today). x86 is more complex than, let's say, MIPS in the sense that it is designed to complete tasks with only a few instructions rather than using more basic instructions [1].

In the RISC approach, it is broken up into a series of other steps.

Before we get started with the x86 language, first we must understand the main sections of a program written in C. This will be a very brief guide since there is plenty of info online. Note that what I will be talking about is the 32-bit variant of the x86 architecture.

The heap is a section of unmanaged memory (in Java, there's GC so technically it is managed there) that is allocated by the operating system. The OS uses the sysbrk syscall to allocate memory from the requesting function. Unlike the stack, memory is not invalidated when the function returns which leads to memory leaks. To avoid this, in C you would release memory with free() after a call to malloc() or one of its variants. The eap grows upward towards higher memory addresses.

This refers to the region of memory that is allocated to the process primarily to implement functions. This is managed in the sense that the variables created remain local to the function it resides and is invalidated once the function exits (when the stack pointer moves up). The values are still there, but they will be overwritten by the contents of the next function call's stack frame. Two x86 registers that deal with this are:

Note that the stack grows downward towards lower memory addresses. This is also where global and static variables are declared.

These are small storage units located directly in the processor for quick access to intermediate values in function calls. It is known as L0 cache and it is located at the highest level in the memory hierarchy.

There are six 32-bit general purpose registers in the x86 architecture [3]:

ebp, esp, and eip are all known as reserved registers.

There are essentially two schools of thought for instruction format: the AT&T syntax and the Intel syntax.

As an example with the mov instruction, it copies the value that is stored by the second argument into the first argument. 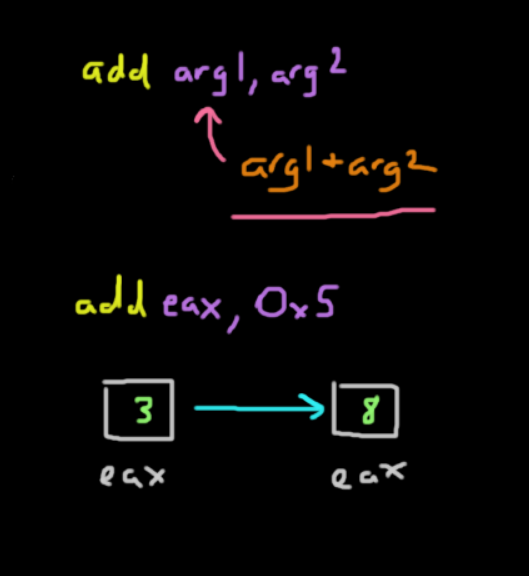 Although it is called mov, it actually copies instead, meaning that the value stored in arg2 is actually still there. However, there are some caveats with this specific instruction in general discussed in the next section.

The caveat comes when you are trying to get values from the stack.

When you are trying to get values from the stack, let's say moving a local variable at ebp - 12 (0xC) with a value of 42, you would expect that you would get the value that is stored at that location into eax. This means that eax should have the value of 42 right?

ebp - 0xC is an address that refers to where 42 is stored in memory. Simply calling mov will move that address into eax, but not 42. If you know C, you know that we would need to dereference a pointer to get the value at that location. In x86, a similar idea also exists where we can think of using the square bracket notation as a dereference operator. 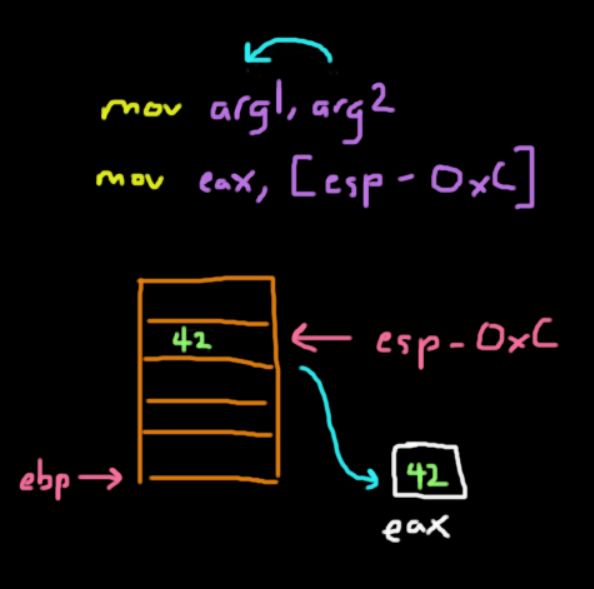 Of course, x86 supports the basic mathematical operators that you would need to perform more complex computations.

The add instruction is a binary operation that adds two given registers with the format add arg1, arg2 which is the same as arg1 = arg1 + arg2. The first and second arguments are summed and stored in the first argument.

The instruction above adds the value in %eax with 5 and stores it back in %eax.

This is a binary operation that subtracts the second argument from the first: sub arg1, arg2 is the same as arg1 = arg1 - arg2.

The instruction above moves the stack pointer down 4 bytes. This can also be done by adding a negative value with a lower overhead. 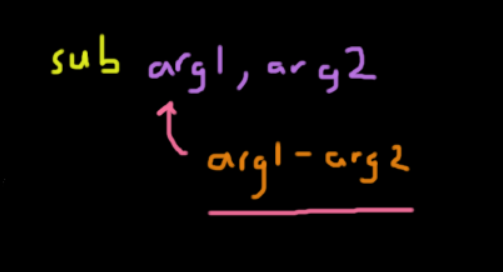 Multiplication is a bit more complex since it comes with several varying instructions. Also, its destination register varies depending on the memory size of the value you are multiplying with.

*Note: The terminology here is different than with other architectures. A word is 16 bits (size of the register) and a doubleword is 32 bits.*

Like with multiplication, division also has the same rules for dealing with different size divisors

Stack based operators are designed to manipulate registers that correspond with the stack pointer, such as %esp and %ebp. Keep in mind that the stack pointer grows downward in memory, so the "top" of the stack is really at the bottom. 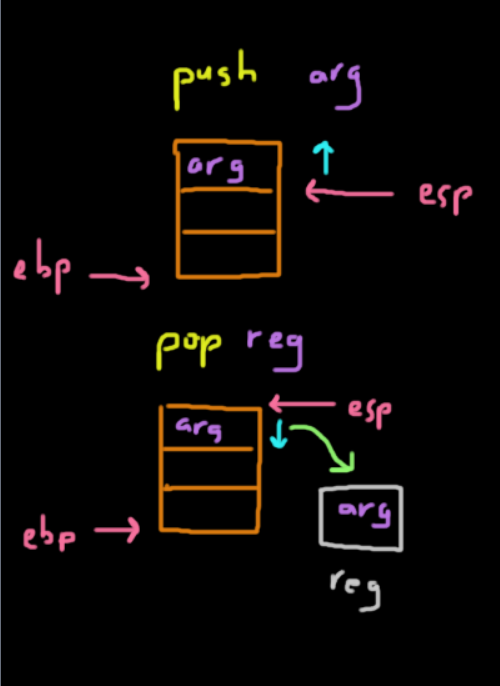 It places the address of the corresponding value specified in the second argument and places it into the register specified by the first argument.

The instruction was mainly included to add support to higher level languages like C where it wants the address of some value whether they are arrays or structs. It would be equivalent to the & operator in C. Let's say we have a struct defined in C like this:

If we were to access the z coordinate of an array of Points inside some for loop, we would run something like this:

In x86, the equivalent statement would be: 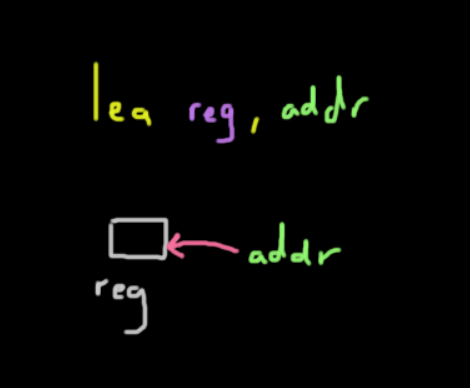 Well no, we cannot. The explanation will become clear after reading a riveting discussion on Stackoverflow spanning 2011 - 2018 [4].

To simply put it, here are the main points of why that is not possible:

There are probably more reasons, but in general, having a dedicated instruction for calculating addresses is a lot cleaner and more optimized than overloading an existing instruction which increases complexity and decreases readability.

The cmp instruction is actually the same as the sub instruction except that instead of storing the result in the first argument, it will set a flag in the processor. The instruction can be executed as cmp arg1, arg2.

That flag will have these possible values:

The flag being stored is actually the value of arg1 - arg2. As an example, this is how it would work:

Now there are many other examples of using the cmp instruction along with many other acceptable arguments, which can all be found here [5].

Typically when using the cmp instruction above, it is followed by a jmp or jump instruction. This instruction takes in a single argument for the jump address as its parameter.

Below is a non-exhaustive list of the different jump instructions that exist. These are mainly the common ones.

There are plenty more that can be found here [6].

Below is an example program written in pseudocode on how it may work. Addresses are on the left and instructions are on the right, assume that the eip points to addr3:

Now you may have noticed that I used the word flag a lot in the last two sections, but what the heck is it?

The idea of the FLAGS register is to serve as a status register that contains the current state of the processor. This essentially means that this 16 bit wide register holds a lot of information as to what is going on in the processor.

If the entire state of the CPU is stored in a single register, how do we keep track of multiple independent states?

For example, let's say if we are performing some addition and a carry value has been generated by the ALU, the carry flag or CF is set to 1 to let us know that this has happened. This 1 is just 1 of the bits in the 16-bit register representing the state. To get the value of CF specifically, we use a mask value of 0x0001, meaning that the least significant bit corresponds to the carry flag.

The most common flags that are seen are typically CF, ZF, OF, PF and SF. Since this is only a brief overview, you can see a much more detailed breakdown of the x86 flags here [7].

Perhaps this is the most important instruction of them all. It is a simple instruction on the surface that takes in a single argument.

This is designed to "call" a function in a program or library. When you disassemble your C program, you will notice that calls made to standard C library functions like printf all point to some memory address.

The way that call works is that it pushes the return address, or the current value of eip, onto the stack and jumps to the argument.

In other words, this means that call <func_addr> is equivalent to:

To call a function with parameters, it would look something like this. This is what foo(a, b, c) would look like in x86:

Note that we always push in reverse order since a stack is LIFO. Recall that all the parameters are stored on the stack. To access them, we can write something like this:

Realistically, we are missing the stack base-pointer register, which helps us keep track of where the start of the stack frame is located since handling functions without it can be quite messy.

These two instructions are always used at the end of a given function. The leave instruction is always followed by the return instruction as seen in disassembling C programs.

These two instructions make up what we know as today as a single return statement in higher level languages like Java or C. They must be used together as they clean up the stack frame and returns to the correct part of the program.

The leave instruction performs the clean up of the stack frame. It:

In x86, it is leave is equivalent to this: 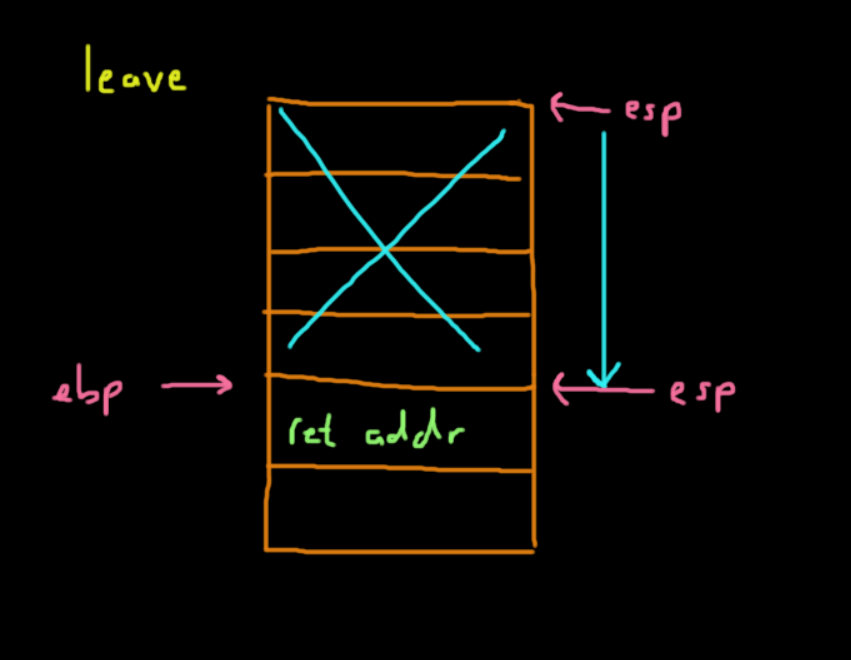 The return instruction takes the value at the top of the stack after leave is called, which is the return address to the caller, and pops it into esp. In the end, the program continues executing where it left off in the caller function. 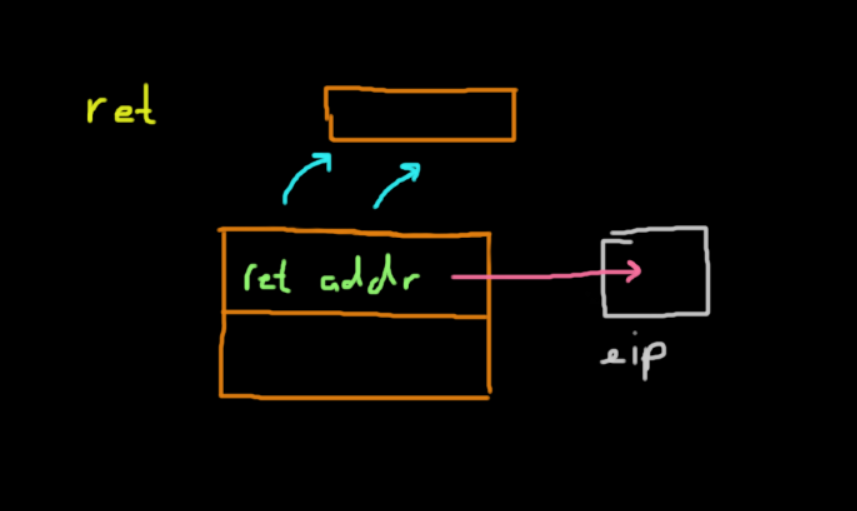 It's time for me to leave and ret

Understanding x86 is crucial in understanding and developing future exploits of your own. I really hope this helped to make x86 seem a little less scary.

There is, of course, a lot more to learn, but this should lay the groundwork for future research. Have fun!

here in my garage

The time for Markdown support on Medium is now.